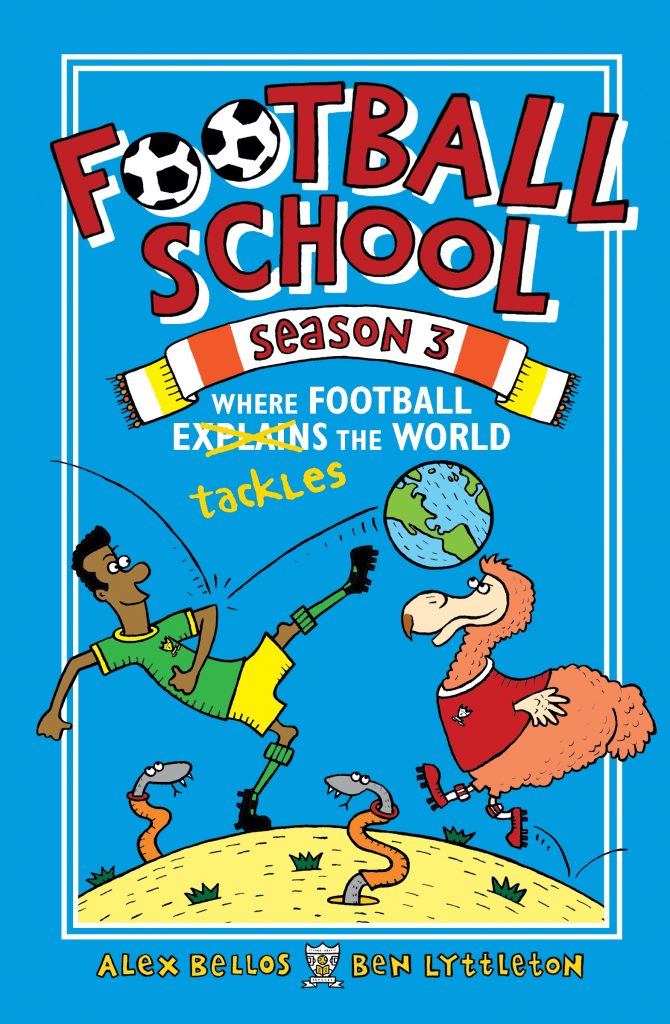 The Football School series has a new edition! This critically-acclaimed set (Book 1 shortlisted for Blue Peter Book Awards, Book 2 shortlisted for #Lollies2018), brings football facts, figures and bizarre insights to the fore. Noah (aged 11) has been able to enjoy the books at his own leisure, devouring the mysteries over the Jules Rimet Trophies, and the mathematical facts about tallest players, goal averages and circadian rhythms (yes, we have discussed this at the breakfast table!). Meanwhile Kit (aged 6) has enjoyed dipping into the book to pull out nuggets of information. With the help of Mum and Dad, he has been fascinated by the stories, science and trivia bursting from the pages. This really is a highly entertaining read; fast-paced, interesting and educational.

For many, football is a way to inspire children to read, and if you’ve seen any of the other blog posts, you will know that Alex Bellos and Ben Lyttleton are keen to emphasise the importance of reading for pleasure. On the Books for Topics blog, they say “What’s most important is that kids read the book – since reading anything brings benefits. But we also hope that the books make children curious about the world.” And on Booklover Jo’s blog, they say “We believed that one way to get kids reading was to provide them with a book on a subject they felt passionate about. Football School explains the world through the prism of football.”

Kit was delighted to put his questions to Alex and Ben (but disappointed that neither of them played Fifa 19).

Ben: I am reading a book about family and friendship called the Baltimore Boys but you’re probably more interested in what my children are reading. My eldest daughter is 9 and she is reading Death in the Spotlight by Robin Stevens. She loves these murder mysteries even if they are a bit gory! My youngest daughter is 7 and she is reading Daisy and the Trouble with Life. She also loves the Claude series by Alex T Smith. They have both read the Football School books and told me they liked them – I hope they weren’t just being polite!

Could you tell us how you got into writing the Football School books?

Alex: Ben and I have been mates for ages and always wanted to work on a project together. We have both written football books for grown-ups, and thought that it would be really fun and worthwhile to write for younger readers. We were avid readers when we were kids, and we both know the advantages that reading brings.

Ben: We are passionate about getting children to enjoy reading – we know you already love it! – and we thought that writing books about football would help reluctant readers tap into their love of football and encourage them to develop a love of reading and a curiosity about the world. We have since been told by teachers and parents that the book has helped their children get into reading, which inspires us to work even harder!

Which football team/s do you support?

Alex: I grew up in Scotland and support Hearts (the Jam Tarts).

Ben: I support Spurs, because they were my local team when I grew up and my whole family supported them. I believe we should never boo any other teams, because supporting a team is often about family, community and being connected to a bigger group. I am proud of my team but also respect and appreciate other teams – especially if their nickname is a yummy food, like the Jam Tarts!

Who’s the best footballer in the world right now? (Kit thinks it’s either Ronaldo or Rodriguez)

Ben: Good question. I watched Lionel Messi play for Barcelona against Spurs the other day and I haven’t seen many players play better than that and I’ve been going to matches for over 30 years.  I also really like Kylian Mbappe and think Raheem Sterling doesn’t get the credit he deserves. They are all great players.

Who are the best TV commentators?

Ben: There are lots of good ones but my favourite is Dave Farrar, because he is a friend of mine! His voice is wonderful, and he comes up with brilliant one-liners. I always remember when Greece beat France in Euro 2004, he said “And France lose! That’s Napoleon Blown-Apart!” It was a clever pun on Napoleon Bonaparte and he claims he thought of it on the spot! It still makes me chuckle…

What’s the most interesting thing you’ve learned when researching your books?

Alex: So many things! I love the fact that stadiums have vomitories, that eagles are the most popular mascot for football teams and that the coelacanth is a fish has limbs instead of fins!

Ben: As a younger sibling, I liked learning that younger siblings are more likely to become professional footballers. That’s good news for Kit! Also that female players are less likely to be left-footed, that Iceland has 130 volcanoes, that paint is like a cake and that the Prime Minister of India once drank his own wee!

Who is the best Welsh footballer?

Ben: Right now, or of all time? In both cases I would say Gareth Bale! An incredible player who has always shown how much Wales means to him. There is an exciting new generation of players coming through as well, so keep an eye on Harry Wilson and Ethan Ampadu – it’s a really exciting time for Welsh football.

How many keepy-ups can you do?

Ben: I have got up to 96, but always lose my concentration as I get close to 100. Annoying!

Alex: Not as many as Ben!

Apart from your books, what other books about football would you recommend?

Alex: My favourite football books are anything by Simon Kuper, Fever Pitch by Nick Hornby and Twelve Yards by Ben Lyttleton!

Ben: Alex is so nice! I would say Futebol by this guy called Alex Bellos, it’s all about Brazilian football and it’s Brazilliant!

What’s next for Alex Bellos and Ben Lyttleton?

Ben: It’s really exciting! We also have our youtube channel which is youtube.com/FootballSchoolFacts and we upload new videos all the time so please check it out and subscribe!

Thank you to Alex and Ben for answering the questions and to Walker for sending us a review copy of the book. You can follow Alex and Ben on Twitter or visit the Football School website.