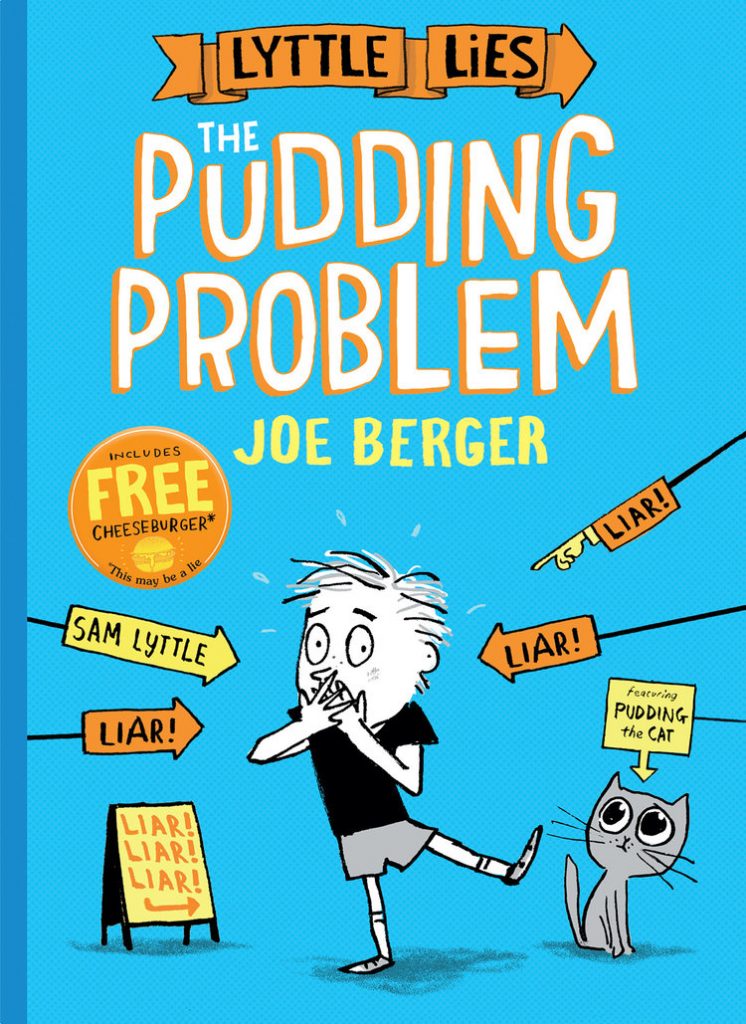 The Pudding Problem by Joe Berger is nominated for the #Lollies2018 in the age 6-8 category. Kit (6), Nina (9) and Noah (11) have all read this hilarious graphic novel and enjoyed it very very much! They got caught up in the misadventures of Sam Lyttle, a boy who keeps getting into trouble though it has nothing to do with lying (honest)! The eponymous ‘Pudding’ is Sam’s cat – and the ingenious story of how Pudding came to be the family pet and get her name is worth the entry fee alone. Noah picked up on the subtle humour in the illustrations – sometimes it’s unmitigated ‘out there’ humour, which had Kit and Nina in fits of giggles and outbursts of belly-laughs, and sometimes it’s just in a ‘look’ or more understated reference in the brilliant drawings. There’s something in this book for everyone, adults included, so the age 6-8 tag is a bit misleading. Either way, all five worms loved The Pudding Problem and its follow-up The Stinky Truth. Here’s the book trailer from Joe’s website:

Joe Berger lives in Bristol with his wife, three daughters, cat and dog. He regularly collaborates with Pascal Wyse, as Berger & Wyse on a weekly cartoon published in the Guardian’s Weekend magazine. He says “telling jokes in cartoon form remains one of my favourite things ever”. He has written two Lyttle Lies books and illustrated many more. We were delighted that he agreed to answer the Worms’ questions, so here are his answers…

At the moment I’m reading Karl Ove Knausgaard, My Struggle vol 1 – it’s a grown-up book but I’d recommend it once you’re older. Also reading some comics, including Greatest Ever Marlys by Lynda Barry, which is brilliant.

Could you tell us how you got into writing and drawing?

When I was little my mum used to read fashion magazines like Vogue, and she would sometimes show me an illustration she liked and ask me to make her a version of it. So I learned a huge amount from copying other people’s drawings and techniques – it’s a brilliant way to learn, to unpick how drawings and paintings are made. From a young age I was also obsessed with comics, and always wanted to do my own comic strip. In 2002 my friend and I landed a job of doing a 4 panel comic in the Guardian newspaper – and co-writing that each week gave me the confidence to write children’s books, which was a long-held ambition. Although the 4 panel strip stopped in 2009, we continue to do a single panel cartoon in the Guardian every week – so far that’s nearly 900 cartoons!

Where and when do you work?

I work in my studio, which is a 20 minute walk from home, in the centre of Bristol. It’s a lovely room with lots of natural light, and room to play the VERY OCCASIONAL board game, which is my big hobby when I’m not making books and cartoons. I usually work 9-5 Monday to Friday, as I find keeping regular hours helps me organise my time. Many mornings I’ll spend an hour or so dreaming up cartoon ideas, and then switch to writing or book illustration later in the day. 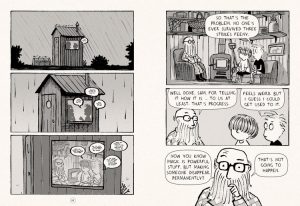 Can you tell us about your methods?

All my work starts with drawing on paper. I usually do rough drawings in pencil, and then final drawing in brush pen and ink on a clean sheet of paper  which is just thin enough to see a bit of the rough drawing underneath. But for cartoons I like to draw straight in ink, and see where the drawing goes. It’s harder to be that spontaneous with drawing for children’s books because there are often a lot of changes to make.

What advice would you give to budding young illustrators?

Copy the stuff you love! I don’t mean trace it, that wouldn’t teach you much – but copying really makes you focus on how the artist/illustrator was able to achieve what they did. It’s an invaluable way to learn – and of course, your own style will start to seep in to those drawings, and you’ll naturally start to create your own work.

Is it difficult to do funny some days?

Yes it is! It can be very frustrating if you don’t feel like you’re in the right mood. See next answer . . .

Is being funny a serious business?

It is serious and silly in equal amounts. It’s serious in that you have to be able to be funny on demand, even if you don’t feel like it. For this reason, I carry a small notebook wherever I go, to note down any funny ideas. So then when I need to be funny but don’t feel like it, can look in my notebooks for inspiration. These are not really sketchbooks, though I have those too. I have a collection of about 40 old notebooks which I am always looking in for thoughts and ideas I might not have used yet. But I have to keep writing in new ones too!

Hmmm, that’s a good question – names for characters are so important. Sam in the Lyttle Lies books was originally called Joe, because the stories are loosely based on my misadventures as a boy. But I wanted to distance the character from me because other bits are totally made up. I have a friend called Sam, and Sam seems like a similar name to Joe – one syllable, 3 letters etc. So that’s how Sam was named. Pudding is called Pudding because of what happens in the story – I wish I could remember how or when I came up with that idea. But I can’t.

Which books, authors and illustrators inspire you?

I love Just William stories, and Petit Nicolas stories too, which are kind of a French version of Just William, with drawings by one of my favourite artists, Sempé. I find other cartoonists very inspiring too – Charles Shultz who made Peanuts (Snoopy and Charlie Brown) every day for 50 years – as well as other single panel cartoonists like Charles Addams and Edward Steed.

Ever been to Wales?

Yes, I love WALES! I live in Bristol, so not far from South Wales, and we go at least once a year. We often stay in a place called Capel y Fin in the black mountains, which is an area I love, near Abergavenny. There’s a hill there called The Tumper which we love to climb.

You’ve illustrated work for others – what’s been your favourite of these projects to work on?

Hmmm, it’s hard to pick favourites. One that stands out is the recent Chitty Chitty Bang Bang series I worked on with Frank Cottrell Boyce – I grew up watching the film in the 1970s, so it was a real thrill to get to work on the three new books. I was worried about it because I’m not good at drawing cars, but it helped me get better I think.

Are you an animal person?

Yes I am. We have a cat called Spooky (she’s white like a ghost) and a dog called Sybil. Sybil is a Cairn terrier, and she’s quite naughty – she loves to race out into the garden and bark at birds (and hot air balloons), which gets us in trouble with the neighbours.

What’s the weirdest doodle in your doodle book?

There are so many to choose from. I’m going to open a notebook at random and see what I find, ready? Here goes . . .

Let me try again . . . ok, a robot punching a sandwich, saying “I love you, sandwich”. There’s two weird ones right there.

The worst lie is too long to put here, but it might end up in a book one day :-/ But I stopped lying when I was about 12, so nothing too bad since. It’s a habit I learned to break, because it takes a lot of energy to stick to your story in the face of mounting evidence to the contrary, and anyway you always end up getting in trouble twice – once for the thing you covered up by lying, and once for lying about it. It takes less energy, but more bravery, to tell the truth. In my case it also took a large box of Smarties, offered to me as an incentive to own up.

What’s next for Joe Berger?

I don’t know If I’ll get to write more Lyttle Lies books, but I want to tell more stories with cartoons, so I’m working on a couple of ideas. At the same time I’m still drawing my cartoons, and hope to find more places that are willing to publish them.

Thank you to Joe for answering the worms’ questions. We’re really grateful for the time he gave us and are thrilled with his answers. You can vote for the Pudding Problem in the #Lollies2018 here. You can follow Joe on Twitter or visit his website. Thanks to the #Lollies2018 team for inviting us to be part of the Blog Tour again. Check out the other posts: