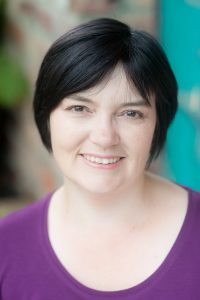 Claire Fayers is the celebrated author of two books about the Accidental Pirates – ‘Voyage to Magical North’ and ‘The Journey to Dragon Island’. The first instalment is highly praised and recently made the shortlist of the Federation of Children’s Book Groups’ annual award. The much-anticipated second book in the trilogy is just available in the shops and had us spellbound from the outset.

Claire is very keen on her allotment and also enjoys skiing, flying kites and music – particularly cello and piano.

Born and raised in South Wales, Claire used to work at the Cardiff University science library; she also wrote short stories for women’s magazines before weighing anchor and writing her brilliant books for children. So avast shipmates, and greet your captain…

You’ve just launched ‘Dragon Island’. How do you feel when you release a book into the wild?

Excited. Terrified. When my first book came out last year I felt like the biggest fraud imaginable because every other author was so professional and capable, and then there was me floundering about incompetently. Now that I have two books out, I’m feeling less like a beginner, though still not quite like a proper author yet!

Aubrey and the Terrible Ladybirds by Horatio Clare. It’s a terrific read, funny and adventurous whilst dealing with some very serious issues about family, friendship and the environment. And it had a German time-travelling spider – what more could you want?

I have an office at home with a desk that I bought off ebay with my first advance payment. I do most of my writing in the mornings and keep the afternoons free for editing, admin and watering my allotment. This year I’ve been meeting a friend for writing sessions twice a week. We go to a local coffee shop where we sit in near silence and drink vast amounts of coffee, hunched over laptops for two hours. It is fantastic for productivity.

My books are firmly inspired by the stories I loved as a child. I read voraciously – sci-fi, fantasy, myth and legend, adventure and comedy. And then there were the films with special effects by Ray Harryhausen (Jason and the Argonauts is my all-time favourite.) The best inspiration happens when completely random ideas collide and turn into something quite unexpected. When I’m starting to write a new book, I spend a few hours making a list of everything I’d like to include, then I try to connect them. Like pirates, librarians and penguins.

What is your favourite children’s book of all time?

Such a difficult question! My favourite book changes daily depending on my mood, the weather and what I’m currently reading. But, as a prototype of all those books I’ve ever loved, I’m going with Enid Blyton’s wishing chair stories. They have adventure, danger, humour, magic, travel to strange places, and the hero is even called Peter. I can still remember my teacher reading the books to us in primary school, one chapter a day, and I was always desperate to know what happened next.

How long did it take you to write Dragon Island?

It took about six months to write the first draft, then another six months on edits to produce the final version. It’s the fastest I’ve ever written a book. Voyage to Magical North took about four years, but of course I didn’t have a deadline then.

The Accidental Pirates have some peculiar names. How do you choose character names?

I started with Cassie O’Pia and thought if I was going to mangle constellations I might as well see if there were any others I could use, so I bought The Dummies Guide to Astronomy and went through the index. It gave me Marfak West (a star in the Cassiopeia constellation) and Aldebran Boswell (the star Aldebaran, but I kept mistyping it.) And, of course Orion and the Onion.

Some of the pirates have names that are awful puns – Trudi Storme, for example. And I chose other names as the punchlines to awful jokes – apologies to Tim Burre and Ewan Hughes.

Character names are very important: wherever I get them from, they have to feel right and fit the personality of the character.

How important is Wales and being Welsh to your writing? Does it have any influence?

It’s very important. The off-beat humour, the love of a good song, dragons! I love the way Welsh legends and folktales are often tied to places – Llyn y Fan Fach, Beddgelert, Caer Idris – and I tried to do the same thing in my books. The people of Dragon Island have a legend of Orion, but it’s grown out of the landscape of the island and is very different to the legend of Orion the mariner from book one.

I haven’t set any books in real-life Wales yet, but my next book is set in a fictional town on the border of Wales and England, so I’m getting closer.

What other authors are you friends with and how do they support you (or are they a hindrance)?

They’re only a hindrance when I have to drop everything to read their books, which happens often. Seriously, children’s authors are a wonderful, supportive group and I’ve made many friends in Wales and beyond.

We understand that you will be releasing another book before the third pirate book, which sounds like it may be for slightly older readers. Was it a conscious decision to do something different? (and what more can you tell us about that book?)

It was a decision made with my editors. I have a third pirate book in my head but I also had an idea for something very different and my editors loved it, so we decided I should write that one first. It’s a Victorian mystery, set in the fictional town of Wyse, the only town in Britain where fairy magic still works. Twelve-year-old Ava and her brother go there to work, and they soon find themselves in the middle of a very sinsiter plot. The story has the humour of the pirate books, but it’s a touch darker, with some very creepy villains and a sarcastic talking book of prophecy.

I used to work in the science library at Cardiff University and I had planned to get my professional qualifications and become a subject librarian. It was a great place to work and I’m still friends will all my ex-colleagues. If I hadn’t got my book deal I’d still be there. 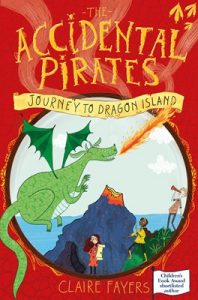 The Voyage to Dragon Island is published by Macmillan Children’s Books and is available online or in your local bookshop.

“This is a great series for readers of nine or ten who want fun, page-turning fantasy adventure!” Barnes & Noble

“With an ocean full of danger, dragons, dinosaurs, plenty of knockabout humour, some brilliant plot twists, heartwarming friendships and a brilliant bunch of pirates, you really wouldn’t want to miss the boat!” Lancashire Post

“At the heart of this riotous book there are life-affirming messages of resilience, self-belief and friendship. We loved it!” Family Bookworms