As part of the Laugh Out Loud Blog Tour, we are thrilled to bring you an interview with Jon Blake, author of Thimble Monkey Superstar. Thimble is nominated in the category for Best Laugh Out Loud Book for 6-8 year olds. The full list of nominees is as follows: 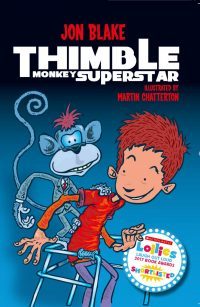 Thimble is a rollicking, shoulder-heaving romp of a book with the tearaway monkey causing havoc from the outset. Calamity follows catastrophe as the Dawsons look after the monkey while the neighbours are away. Daddy Worm read this in school to a class of 8 year olds and they were rolling around on the floor with fits of the giggles. If you’d like to read Nina’s full review, it’s available here. Alternatively, Jon Blake has written an exclusive introduction to Thimble Monkey Superstar.

Jon Blake has lived in Cardiff for the past 30 years and has built a reputation for quality, slightly absurd, children’s fiction. He teaches creative writing, specialising in writing for children although is also experienced at writing for TV and radio. He is delighted to be nominated for this major award and the worms (especially Nina) were overjoyed to be able to put their questions to him:

Your website describes you as an “egalitarian author”. What does this mean?

Broadly speaking, it means I’m on the side of the underdog, or sometimes the undermonkey!

I’ve been thrown out of my office so my six-year-old can have a bedroom, so now write in what used to be the kids’ playroom, which has no windows!  I don’t write every day, unless I’m in the middle of a book, and then I write whenever my brain is working!

You’ve written a lot of books. Which was the quickest book to write and which book took the longest?

I’ve had 60 books published and have probably written as many which never made it.  I once wrote a book for the OUP called Rover (about a pet spider) which was about 80 words and took a day.  Then there was the Last Free Cat, my YA thriller, which I started in 2001 and finished in 2007.  But that was because I got stuck.

These usually come to me with very little conscious thought: the name ‘Thimble’ for example.  On the other hand, ‘Jams’ is a homage to the writer Flann O’Brien, and ‘Douglas Dawson’ was the name of a boy in my primary school who regularly fainted in assembly.

Which books (apart from your own!) make you laugh out loud?

The last book which made me laugh out loud was ‘Rich’, the biography of Richard Burton.  It was extracts from his diary.  Flann O’Brien always makes me laugh, especially ‘The Third Policeman’. As to children’s authors, for me Mark Twain is way the funniest, followed by Lewis Carroll and A.A.Milne.

Besides those already mentioned I have to pay respect to Barrie Hines, author of ‘Kes’, who sadly died last year.  As an English teacher in the 80s I was indebted to him for engaging comprehensive school pupils who didn’t like anything else!  I must also mention Erica Jong, who inspired me to write my first (adult) novel, and Robert Leeson, who wrote a brilliant history of children’s fiction, ‘Reading and Righting’.  But the writer who obsessed me as a young man was one of the least humourous authors to set pen to paper, D.H. Lawrence!

How important is Wales and the Cardiff community to your writing?

I’m rarely specific about place in my books, but there’s a whole lot of Wales under the surface of most of them.  Several scenes in Thimble were inspired by what was going on around me in Canton, Cardiff – the demolition of the police station for example.  And ‘The Last Free Cat’ begins in a fictionalised Adamsdown, where I lived to nineteen years. As the story moves on you might spot Twmbarlwm, Talybont-on-Usk and a few other places if you’re observant! 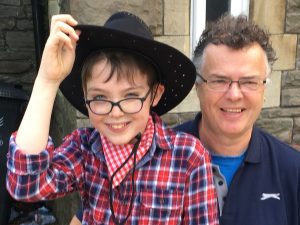 Thimble Monkey Superstar features a character with cerebral palsy and the book has been included in several lists that encourage diversity in children’s fiction. How important is it that Thimble promotes disability awareness?

My son Jordi has cerebral palsy so obviously it’s a big issue for me.  It’s important that children understand disability and regard it as an everyday fact of life, not something alien, funny or frightening. I hope Thimble will contribute to that worldview, not by preaching, but by readers identifying with Jams.

If someone really enjoys Thimble, which other books by Jon Blake can you recommend to them?

The next Thimble!  ‘Thimble Holiday Havoc’ comes out on November 9.  From my back catalogue, there’s ‘One Girl School’ and ‘Stinky Finger’s House of Fun’. For older kids, ‘The Last Free Cat’.  But check out the list at www.jonblake.co.uk, as there are so many!

Do you ever laugh out loud when you’re writing your own books?

Thank you so much to Jon Blake for this interview. If you’d like to win a copy of Thimble Monkey Superstar (courtesy of Firefly Press), we’ll be launching a competition on our Twitter feed today. You can catch up with the other nominees for the #Lollies2017 by visiting the other wonderful blogging sites shown below.

The winning book in each Lollies category will be decided solely by children’s votes, with schools and parents encouraged to help kids get involved and vote via the Lollies website, www.scholastic.co.uk/lollies, or via the Scholastic channel on the PopJam app.